The Emperor Has No Clothing

In this book the Emperor is the South African Constitutional Court. Given its present huge popularity amongst most South Africans, saying that it has no clothing would seem to be either a brave, or a foolhardy exercise!

Keith Matthee sets out succinctly why he is of the view that the Emperor has no clothing. Central to his reasoning is the recent ruling by the Constitutional Court concerning whether or not unborn human life is human life worthy of dignity.

Given the sheer numbers of unborn children and their mothers in crisis affected by this ruling, as a society we ignore the challenge by the First Applicant in her Foreword at our peril: “At times it is not an easy read, but I believe it is a crucial read if we are to begin to regain our soul as a nation.”

As Professor Forstchen observes in his review on the film “Downfall”, which exposes the evil of Adolf Hitler and his social Darwinism, “The true form of evil rarely looks evil on the surface, it seduces us with fair face as it leads, sometimes an entire nation, into damnation.”

In this book the author quotes a verse from a Pink Floyd song “Comfortably numb.” At one point it goes:

Now I’ve got that feeling once agin

I can’t explain, you would not understand

This is not how I am

I have become comfortably numb.”

The challenge of this book is to all people, whether they accept or reject Jesus, whether they are inside or outside the church. It poses the question to them whether in their picture of and response to Jesus they “have become comfortably numb” as a strategy to avoid radical consequences to their lifestyles of following the Jesus of the Gospels.

Dealing with some practical issues a refrain of the author is, “This is a hard teaching of Jesus, but it is not complicated.” This lies at the heart of the challenge of Jesus.

The Resurrection – A Lawyer’s View

In 111 AD, referring to his belief that he could not stop Christianity in its tracks, Pliny wrote to Emperor Trajan: “For this contagious superstition is not confined to the cities only, but has spread through the villages and rural districts; it seems possible however to check and cure it.”

At the heart of this ‘contagious superstition’ was the alleged resurrection of Jesus. Writing nineteen centuries later the former Chief Justice of England, Lord Darling, wrote: “The crux of the problem of whether Jesus was, or was not, what He proclaimed Himself to be, must surely depend on the truth or otherwise of the resurrection.”

In the Foreword to this book, Professor Rose commenting on the legal case for the resurrection writes: “Keith Matthee’s excellent short book provides some of the raw legal data and the juristic argument on which the case is built. It makes compelling reading and it is a great pleasure and privilege to introduce this work.”

Keith Matthee is at the Cape Town Bar. He was appointed as Senior Counsel by President Mbeki in 2002.

This thesis was written by Keith in 1987 as part of the requirements for his Bachelor of Divinity degree. Part of its usefulness lies in reminding the reader of something of the context of the Church in South Africa in 1987, not only from a historical point of view, but with a view to help us decide today whether the underlying challenges facing the Church presently, in any meaningful way is different to that in 1987. Chapters 1 and 4 are germane to this consideration.

Chapters 2 and 3 present us with an ever present challenge of Christ’s chosen method of ministry in the world, not least of all in a Covid 19 era. 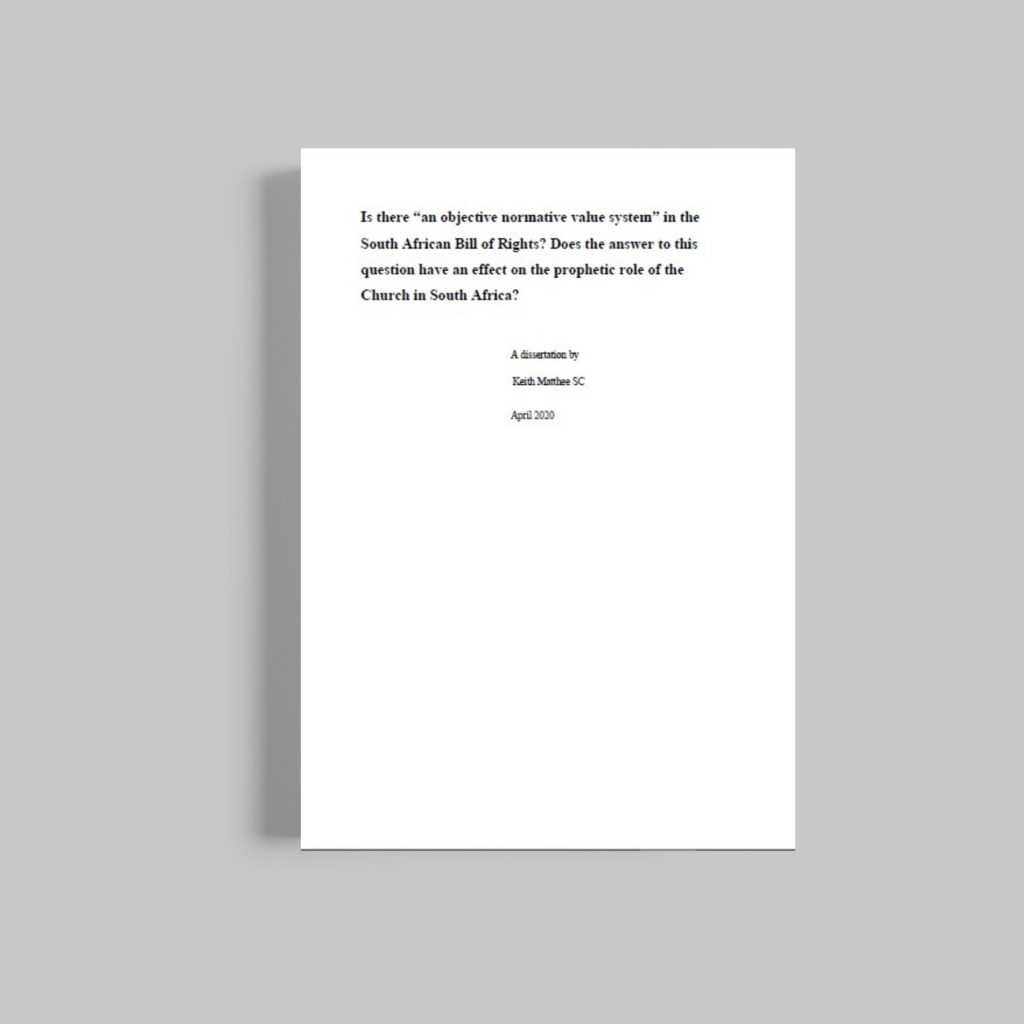 Is there “an objective normative value system” in the South African Bill of Rights? Does the answer to this question have an effect on the prophetic role of the
Church in South Africa?

His conclusion is reached after traversing general and legal philosophical arguments, followed by an in depth analysis of seminal Constitutional Court judgments dealing with issues of a profound moral character, such as the death penalty, what is human life, marriage, parenting, adultery and the content to be given to ubuntu.